The poet Keats does not mention otters in his light-hearted doggerel dedicated to the river Teign (shown below as it looked today). Their absence from Keats's poem is not very surprising since in his day all otters were perceived as Vermin. Back then otters were thought simply to be fish-devouring pests. However, even though they did not appear very often in verse they were there, those secretive spirits of the river, even if they were not considered worth mentioning. And now attitudes have altered, persecution has mostly ceased, and toxic pollution is less of a problem, the otters are protected, and are returning again. Happily it is more fashionable to mention them. Yesterday I spent some time finding their many tracks and spraints in the sandy banks of the sprightly Teign: 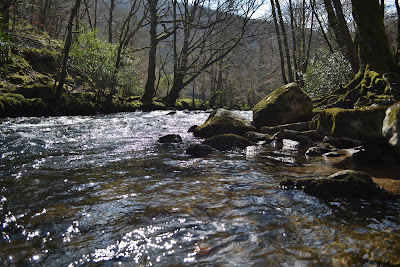 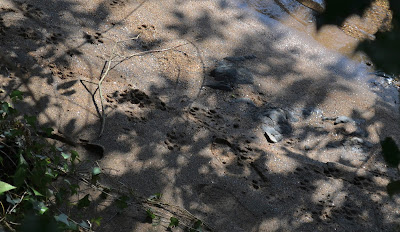 And later I found the very silly poem Keats wrote. Or is it silly? He claimed it was, but it is a poem that takes in almost the whole length of the river and reveals much of its ecology, character and emotional resonance - watery, human, animal and otherwise:


'Here all the summer could I stay'
'For there's Bishop's teign
And King's teign
And Coomb at the clear Teign head -
Where close by the stream
You may have your cream
All spread upon barley bread.
There's arch Brook
And there's larch Brook
Both turning many a mill;
And cooling the drouth
Of the salmon's mouth,
And fattening his silver gill.
There is Wild wood,
A Mild hood
To the sheep on the lea o' the down,
Where the golden furze,
With its green, thin spurs,
Doth catch at the maiden's gown..'


Keats dismissed his poem as doggerel; as he says, it's full of predictable rhyme and joyful bawdiness. But having just been to see the river as it slides gracefully through a wooded Dartmoor gorge, and seen it surrounded by the most exuberant display of wild daffodils, with dappled sunlight sifting through the trees and the whispering sibilance of the river all soft and the air sweet with the edge of spring, I can't help feeling something like forgiveness for Keats's easy rhymes. Could his rosy vision of the revels of 'maidens sweet' have been an early depiction of the binge drinkers of his day? Anyway, does it matter, when we can be enraptured beside the riverbank where 'O and O/, the daisies blow and the primroses are waken'd/ and violets white /sit in silver plight..?

'.. There is Newton Marsh

With its spear grass harsh -
A pleasant summer level
Where the maidens sweet
Of the Market Street,
Do meet in the dusk to revel.
There's the Barton rich
With dyke and ditch
And hedge for the thrush to live in
And the hollow tree
For the buzzing bee
And a bank for the wasp to hive in.
And O, and O
The daisies blow
And the primroses are waken'd,
And violets white
Sit in silver plight,
And the green bud's as long as the spike end.
Then who would go
Into dark Soho,
And chatter with dack'd-hair'd critics,
When he can stay
For the new-mown hay,
And startle the
dappled prickets?'

I'm not sure what 'dack'd-hair'd critics' look like, nor what 'dappled prickets' are, but I can begin to imagine the playful contrast. Having mingled with both types of fauna I think that just like Keats I'd prefer to be in the company of the 'dappled prickets' when spring is here. 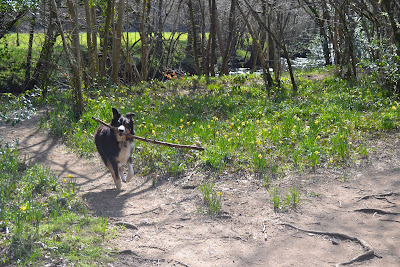 I came home knowing about a new stretch of river, and beyond the poetry, I was thrilled at finding otters there. Each new set of paw prints had revealed something more of the river and of the otter's secret life. The prints had shown that there were cubs, and that there had been some play amongst the pebbles and reedy banks, as well as the busy feeding routine. My mind was full of images of the mingling of wild water and whiskers, of webs and wet fur. But back at home, on opening my emails, I was faced with the shock of this image sent from a friend who lives close by the Teign; an otter had been found still warm, knocked by a car. A young female. She could have been the very maker of those traces of footfall and play that I had just seen in the sand: 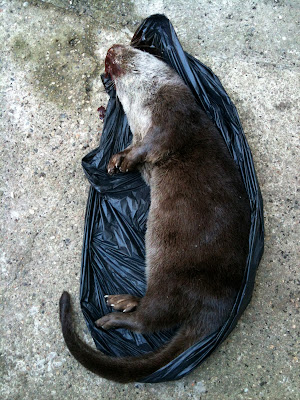 Perhaps just to ask if it is time now to slow down, mindful that we are ploughing through somebody else's world?

Afterword: 'dappled prickets' are apparently young male fallow deer in their first year, with new antlers that have not yet grown more than one prong or shed their velvet.
Posted by Miriam Darlington at 00:29

Miriam Darlington
Author, PhD student and creative writing tutor based at the University of Exeter. OTTER COUNTRY, my book about searching for the wild otter in Britain, was published by GRANTA in Autumn 2012. Praise for OTTER COUNTRY: 'A personal tale of burning quest for one of the most charismatic of all our animals. It is a beautiful book full of sensuous lyricism, but it is also an important contribution to British writing on otters, a tradition in which this country is especially rich.' Mark Cocker, author of 'Crow Country'. 'This is a diary of utter devotion where landscape is interpreted as otter-text, its messages elusive but traced with deep sensitivity.' Jay Griffiths, author of 'Wild: An Elemental Journey'. 'A lovesong not only to otters but to Britain.' Ruth Padel, author of 'The Mara Crossing'. 'A celebration of light and water, the polished pewter of our streams and their most charismatic inhabitants, 'Otter Country' is a mercurial, sinuous, breath-taking book about the pursuit of this most elusive of British mammals.' Patrick Barkham, author of 'The Butterfly Isles'.